Another week is nearly over and still I haven't got over my case of “blogger's block”. However as Jo is currently with Archie at the hospital (nothing to worry about, he hurt his foot getting off the climbing frame at school today, it's been x-rayed and there is no break) I thought I should take the opportunity to write a few words.

This is my first post on my “new” blog as well. I decided to “rebrand”, not really sure why, but welcome to “The Quantified Expat”, where I shall continue to entertain / bore (delete as appropriate) you with tales of our life in Abu Dhabi, but will also share posts on the theme of the “quantified self”, something that I am becoming more and more interested in.

On to business. Life here continues to go well. Work gets busier and busier, but I'm still enjoying it so that's fine. As the heat (appropriate description) map below of places I have been to this year shows, I am spending a lot of time in Dubai, probably two or three days a week. The reason for this is that so many of the opportunities I am chasing are up there, as are a number of my team. It's a longish drive, about 80 mins door to door, but it's infinitely better than spending time on the motorway network of NW England in the rain, so it really doesn't bother me. 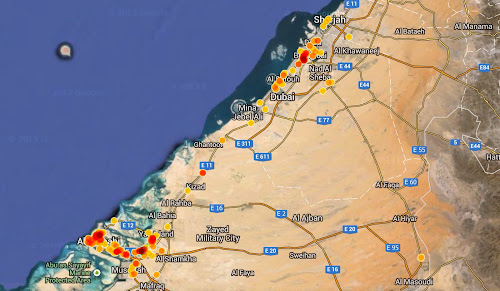 As if I'm not busy enough, this week I have started volunteering for INJAZ, the UAE version of Young Enterprise in the UK. Over the next couple of weeks I am spending four sessions with a class of 25 female Emirati university students, helping them think through how they want to take their careers forward. I did the first session yesterday and it seemed to go ok (I didn't get thrown out anyway), so I'm looking forward to going back tomorrow, when the topics for discussion will be oral and written communication.

Jo has found herself a job in the last few weeks, as a sales agent for a detox programme. She gets commission on each pack she sells, and the more she sells the cheaper she can buy the packs herself. Unsurprisingly she has been doing very well, so there are now expat women (and one unfortunate man) dotted around Abu Dhabi drinking what looks (and tastes) like pond water at regular intervals. She got her first commission payment today and headed straight to the alcohol shop to spend it. Something doesn't seem quite right there.

Henry is still here I think. At least I can hear banging and crashing from the top floor, so it's either him or a very large cockroach scuttling about. He's a teenager so we don't see much of him except for the occasional mealtime. He's got end of year exams at the moment so (hopefully) when he is locked away in his room he is studying hard. After half term (which is next week) he is doing a week's work experience. He has managed to secure himself a placement at CNN, which is a great achievement, and should give him a good insight into the world of TV, which is an area that really interests him.

Archie and Flossie are still getting stuck into their new lives, enjoying school and making lots of new friends. They are both having piano lessons now, and Flossie has recently started singing lessons (which are her reward for doing her piano practice which she hates doing). She is enjoying the singing very much, although she refuses to sing anything other than One Direction songs! She was very pleased to hear that 1D (I think that is how I am meant to refer to them) are coming to Dubai to do a concert in April 2015, and Mummy and Daddy are under strict instructions to do whatever it takes to get tickets (it looks as though I will be queuing up in Abu Dhabi Mall from a very early hour on Thursday). Mind you she said if we can't get tickets, “we can just arrange to meet up with them whilst they are here anyway”. Bless.

As for the weather, it's getting hotter and hotter. More often than not it's already above 30 degrees when I leave for work shortly before 7am, and is getting close to 40 degrees most afternoons. It's certainly too hot to spend prolonged periods in the direct sun, and we are close to the point where it is too hot to go for our Tuesday evening cycle round the Grand Prix circuit. Nevertheless we are still keeping ourselves occupied with indoor activities, or playing in the pool.

Well, the injured soldier will be back soon. Hopefully he'll be able to stagger to school tomorrow, although as it is the last couple of days before half term I suspect they won't be doing much anyway.

Thanks for reading, and it's good to be back.