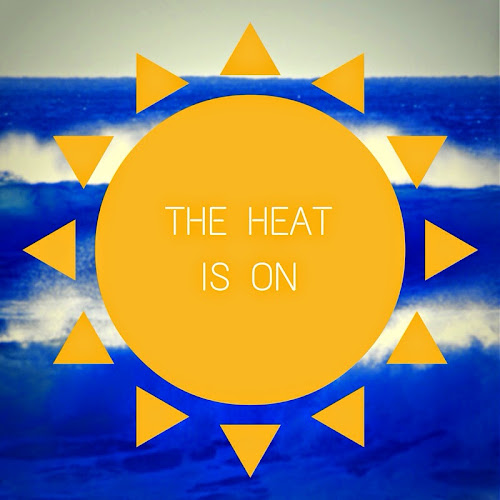 In the UAE blogosphere it is pretty much obligatory to “do” a post about the heat, certainly as your first summer arrives, so I thought it must be time for mine.

Most days at this time of the year the temperature is at least 30 degrees when I set off for work just before 7am. It rises steadily as the day progresses, often reaching 40 during the afternoon and sometimes passing 45. Apparently the highest recorded temperature is 52 degrees, but hopefully we won't have to experience that. The humidity can be oppressive as well, averaging between 55% and 65% most days.

These temperatures are bad enough when wearing shorts and a t-shirt, but nasty when in a suit and tie. Some days I can avoid being outside much. A quick dash to the car in the morning, park in the underground car park, and a quick dash to the lift and the office. If I take my lunch with me I can then avoid going outside until home time. The downside of this is the lack of exercise, but that is for another day.

If I have a meeting out of the office I can usually park close to the client's place of work, and setting off a few minutes early means I have time to cool down before the meeting starts. Some locations can be more difficult to park near to, so in those cases it is usually best to take a taxi and be dropped off right outside the front door.

The worst are meetings within a short distance of the office in places where parking is notoriously difficult. A taxi is still an option if you can persuade the driver to take you such a short distance, but sometimes there is no option but to walk.

In these cases you learn various tricks to try and avoid getting too hot and bothered. I'm becoming an expert at finding routes that may not be direct but keep me in the shade as much as possible, and have learned to pause in front of the open doors of shops and offices to enjoy a cooling blast of air. It helps, but it is inevitable if you are going more than a couple of hundred meters that you will arrive “glowing”.

Thankfully most offices here have very effective air conditioning so you can arrive rather damp and within a couple of minutes be cool and composed and ready to do business.

Unfortunately the air conditioning in my office seems to be amongst the least effective I have found. The rest of the office is fine but when the sun is on my side of the building in the afternoon my rooms starts to get a little uncomfortable. Anyone who used to work with me at PwC will know that this doesn't please me at all.

I don't think it helps that I appear to be locked in a “battle of the air conditioning” with the partner in the office next door with whom I share an aircon control. I turn the temperature down as soon as I get in every day, but – whilst I've not caught him doing it yet – I think he turns it back up when I'm not looking. Brings back memories of stealth battles over the air conditioning with my father-in-law when staying at his apartment in Spain in the past!

I think what I need is a sunshade like on the buildings below which I pass everyday on the way into work. These buildings, affectionately known as “the Pineapples”, have 2000 special panels on the outside which shut automatically when the sun hits them, cutting interior heat gains by up to 50%. 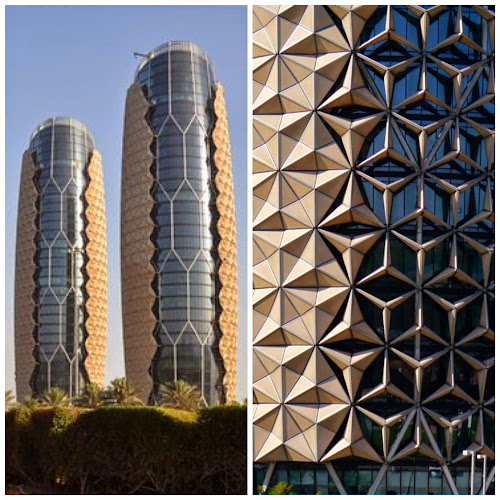 My nightmare would be if the air conditioning in the house were break down at this time of year. It has been known to happen, there was a story in the news a couple of weeks ago about people reverting to sleeping in their cars when they were without air con for a few days. That would definitely be me.

Still, all of these are first world problems. Spare a thought for the petrol pump attendants who serve us expats whilst we sit in our cars with the engine running (dangerous? probably), and what about the construction workers? The Government does try to look after them. From 15 June to 15 September construction site operators must stop work between 12:30pm and 3:00pm, which helps with the worst of the heat but probably not much. 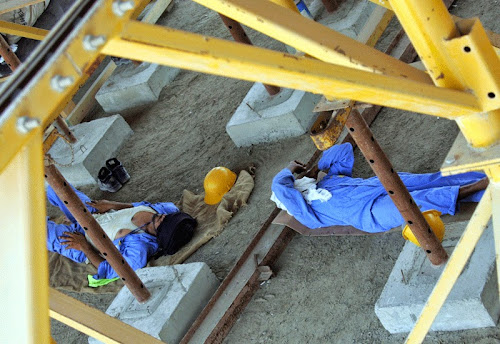 Anyway, all this talk of heat is at risk of getting me hot and bothered so I shall stop here and go and watch another episode of Downton Abbey (five in a week, what World Cup!?).
As always, many thanks for reading. Until next time.