Two days from now I will be saying “ma'a as-salaama” or “goodbye” to Jo and the kids as they head back to the UK for the summer. As I've said previously many expat wives and children do this as soon as school finishes because the summer heat is far too punishing to spend any amount of time outside, and there are only so many times you can go bowling or to the cinema. 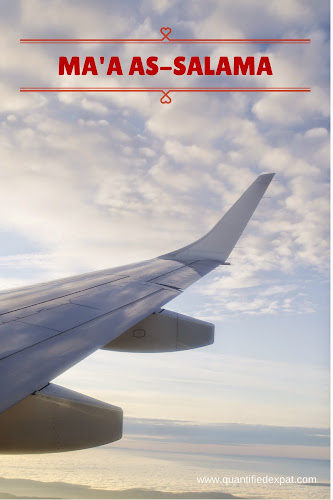 I'll see them again in four weeks time when I fly into the UK for a few days before we head off for our summer holiday in Spain, and then I'll return to the UAE about ten days ahead of them. Before you ask, I know it is a little strange to holiday in Spain when we have a whole new part of the world to explore on our doorstep, but the holiday was booked before we even knew we were moving to the UAE (so much for long term planning!). Next year we hope to be holidaying in this part of the world.

Back to the matter in hand, I know four weeks apart isn't long at all compared to many people's circumstances, but it's the longest we will have been apart as a family, so it is going to very strange not seeing each other for so long. It will be even tougher because as a family we have done so much together over the last year. Of course there is always Skype, a godsend for many expats, although the children haven't yet got past the stage of clamming up or acting silly when given the opportunity to speak to grandparents so I'm not sure how much interaction I'll get from them!

Anyway, enough of the self pity. The summer here is a time for lots of goodbyes, not just families disappearing for the summer, but also people moving on permanently. Contracts may have come to an end, employers may be sending staff to a new country, or people may have decided to head back to their home country. Whatever the reason, one of the things you have to get used to as an expat is the transient nature of this part of the lifestyle.

It affects all of us. Two of the best friends Henry has made have already moved on with their families, and a couple of Flossie's classmates won't be returning in September. One of the first families we made friends with, and very much enjoyed spending time with, headed back to the UK a few months ago (or the wife and children did, the husband will follow them in a couple of months), and a number of Jo's friends are heading off on new adventures.

Jo recognized very early that it is important to develop and nurture a wide circle of friends, so that things don't have to start from scratch if a friend disappears. She has been unsurprisingly good at this, helped I think by the fact that many of the wives have the same attitude, so friendships tend to develop very quickly because everyone is in the same boat. The husbands of course, are hopeless, and find it easier to allow our social lives to be organized for us. Still, it all seems to work pretty well.

Archie has a very healthy attitude to the whole thing. When we were chatting about it over dinner a few days ago he was reflecting on the different countries his friends come from, and how the expat life means that he is “going to have friends all over the world”. It was great to hear him say that, especially as he was the one that we thought may struggle with the move.

I'm starting to plan how I will spend my time whilst I am on my own, especially as during Ramadan I will have a couple of extra hours to play with most days. Obviously (honest) I'll be in the gym opposite the house every day, and will be developing my domestic skills (mind you, there is a long list of restaurants that do deliveries here that I need to work through), but I've also started a list of places to go and things to see (actually if I'm honest there's only one thing on it at the moment, but I'm thinking hard).

And of course, you'll all be delighted to hear that I'll have more time to blog. You have been warned!

PS: I said I'd report back on how I am finding Ramadan. Three days in the main things I've noticed are that the roads have been quieter on the drive into work in the morning, and a little busier on the drive home. It's been easy enough to find somewhere private to have a bite of lunch or a drink. There have just been a couple of instances where I have been desperate for a drink but unable to have one as I was in public, but that's not much of a hardship really.