Time goes so fast. Following a lovely two weeks in Spain with Jo and the kids, I find myself back in Abu Dhabi embarking on year two of our adventure. Yesterday morning we flew from Malaga to Manchester, then Jo and the kids headed off for a final 11 days of catching up with various people in the UK, and I caught the overnight flight back to the UAE.

Today has been a bit more stressful than I expected or hoped. As soon as I opened the front door I knew something was wrong. The stench, which almost made me vomit instantaneously, suggested an animal had died a long lingering death somewhere in the villa. On further investigation I found that what had actually happened is that fuses had blown on all three floors of the house, resulting in three fridges / freezers and their contents defrosting and then being at room temperatures of at least 40 degrees for a week or more, resulting in some extremely rancid chicken, Chilli, and other items.

It took me a good few hours to make headway with the cleaning. Unfortunately I was too nauseous most of the time to take a “selfie” but I'm quite sure I looked ridiculous with a tea towel wrapped round my face, liberally doused in after shave to try and disguise the smell. It worked to some degree but I was constantly on the verge of losing my breakfast.

To add insult to injury the air conditioning was also playing up, particularly in the main bedroom. Given that the temperature today almost reached 50 degrees, I'm sure you can imagine this didn't help keep my stomach settled. 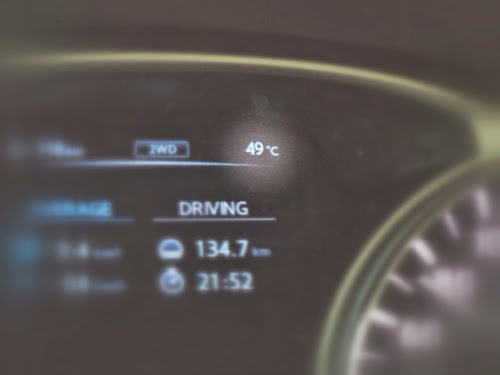 Finally all of the fridges were clean, with their rancid contents deposited in the communal bins, and no doubt as I type there are cats and other animals keeling over having investigated the sweet smelling treats put out for them. My next step was to go to the local supermarket to buy its entire stock of air fresheners, and odor absorbers to be put in the fridges, and these seem to have removed the worst of the smell, although not entirely.

Thankfully the air conditioning has been fixed during the day so I am a little less hot and bothered now. This is a relief because as the sun went down this evening we have had the worst sand storm that I have seen in Abu Dhabi, although I'm sure I'll see much worse in the future. It was quite spooky driving home from the supermarket with the wind whipping the sand around, and visibility really bad in places. Hopefully it will have passed before I need to head for Dubai in the morning. 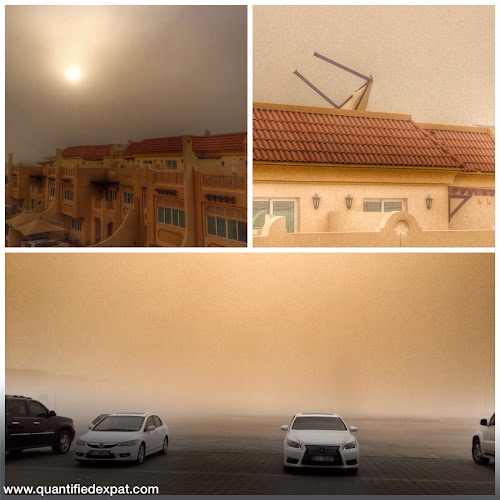 Sandstorm in Khalifa City A

Despite today's issues I can't wait for Jo and the kids to return at the end of next week so we can get on with the next stage of our adventures. We spent quite a bit of time by the pool in Spain planning what we want to tick off our lists over the next 12 months, and we've also got a number of visitors to look forward to, although there are still one or two slots remanding for anyone interested.

Right, well I'm falling to sleep here on the sofa given that I didn't get much sleep on the flight, so I shall sign off for now and speak to you all very sooner.