We spent a couple of interesting hours at ADIHEX today. ADIHEX is the Abu Dhabi International Hunting & Equestrian Exhibition, one of the four biggest hunting shows in the world, which has been running for the last few days at the Abu Dhabi National Exhibition Centre.

We should probably be worried that the section that Archie and Flossie liked most was the weaponry. It has to be said there were some very impressive weapons on display, and Jo certainly enjoyed running her hands over as many as she could, admiring the craftsmanship and how well they handled. 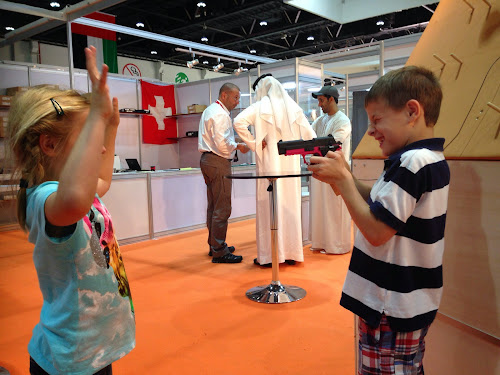 Innuendo aside, there genuinely were some impressive weapons on display, including rifles, knives and swords. Even to complete novices like us it was clear that many of them were works of art, and the prices certainly supported that. I think the most expensive item I found was an ornate sword costing almost £100,000, and I didn't look at everything by any means. Indeed there were VIP sections that we couldn't get in where I am sure the prices were incomprehensible.

The kids were allowed to try holding some of the rifles and hand weapons, and we were a little concerned that (a) they enjoyed doing so just a little too much, and (b) seemed to adopt the required stance too naturally. Flossie's birthday is coming up in a couple of weeks so I'm a little worried that she may soon be changing what she is asking for! 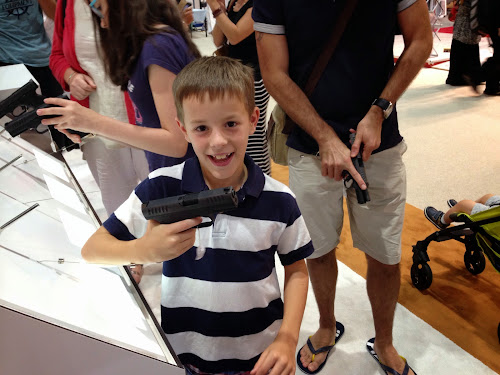 Our next most favourite section was the one dedicated to dune buggies and other vehicles. I in particular enjoyed clambering on and off the various models on offer (innuendo again, sorry!), although I did start getting a little worried when Jo began studying the price tags a little too closely and commenting on how reasonable some of them seemed. Needless to say I dragged her away as quickly as I could. 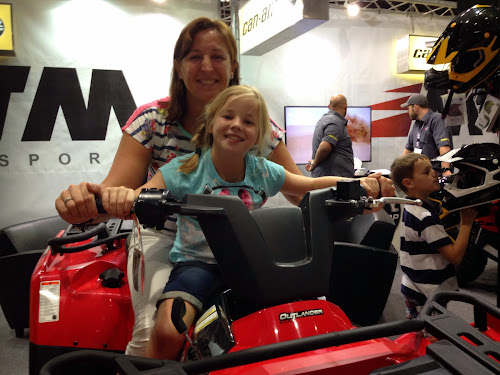 Next up was the falconry section. Falconry was an integral part of desert life in years gone past, primarily as a means to supplement an otherwise meagre diet. Today it is practised purely for sport, but the skill is still highly esteemed and the power and beauty of the falcon are greatly treasured. At the exhibition there were various stalls offering a selection of birds for sale, and these were some of the most crowded places in the hall. Archie and Flossie were a little uncertain about this section, but I think it was more the smell than anything else. 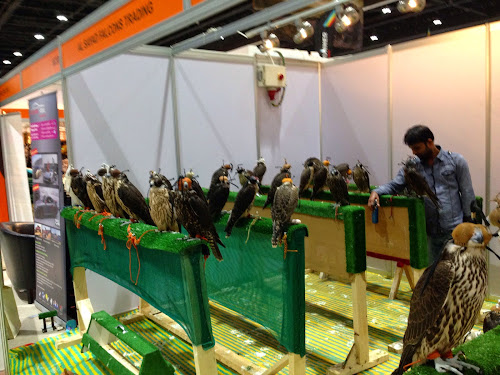 Next was a couple of the cultural displays. The kids enjoyed climbing on a traditional fishing boat to have their photo taken with a elderly fisherman. Jo and I meanwhile had health and safety kittens due to the lack of safety rail on the boat, and the way it wobbled as the children ran up and down the deck. 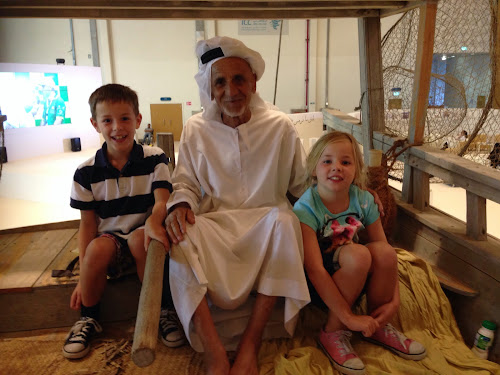 Having disembarked safely we visited the animal shelter stand where we petted some beautiful Salukis. Salukis are another traditional part of Bedouin culture, a graceful, strong and smart dog (similar to a greyhound) famed for its hunting prowess. The stand also housed a number of cages housing cats and dogs looking for new homes, so once again I had to encourage Jo to move on as quickly as possible. 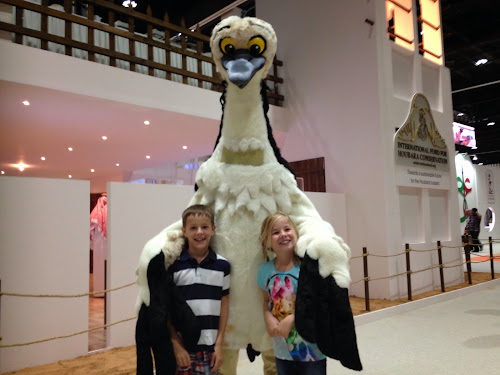 After that it was back for a last play with the guns before it was time for us to head off to the garage to pick up Jo's car which was being serviced.

We didn't really scratch the surface of what was on offer at the exhibition, for example, we didn't go to any of the shows or displays, but we certainly had an enjoyable couple of hours having a good look around, and learning a little bit more of the history and culture of the UAE. I'd certainly recommend it for others when it returns in 2015.