For those that saw the title of this post and clicked on it thinking it must be a cultural post about a historic monument in Abu Dhabi, you are going to be disappointed. In fact the “Abu Dhabi stone” refers to the amount of weight that expats traditionally put on in their first twelve months in the country (more generally known as the “expat stone” as it happens elsewhere as well).

A recent survey found that more than 66% of men and 60% of women in the UAE are overweight or obese. Whilst these figures don’t differ significantly from those in the UK, and there are nearby countries with even higher figures (80% in Egypt for instance), the alarming fact is that they have risen rapidly in recent years, and continue to head in the wrong direction.

I don’t think there are any statistics showing how the figures break down between expats and UAE nationals (although obesity has traditionally been seen as a sign of wealth in the Arab world), but I suspect the expat community accounts for at least its fair share. Some of us (ie: me) will already fit in the category when we arrive, whereas others enjoy the expat lifestyle so much that in the first year they put on enough weight to move themselves firmly into the overweight or obese category.

What is it about the lifestyle I hear you ask? It’s a combination of “first world problems”: the long, lazy brunches with an endless supply of excellent food; an almost limitless selection of restaurants within reach in very cheap taxis; months of ideal BBQ weather; and retreating inside for dinner parties and so on in the hottest part of the year.

Of course all of this can be enjoyed in moderation by exercising a little self discipline but it can be hard sometimes with the endless sunshine not to feel you are on a permanent holiday. Couple that with the fact that many people work long hours, and can find it hard to get the exercise needed to burn off the calories being taken on board, and it can be easy for the weight to go in one direction only.

I said in an earlier post that my history of weight “problems” meant that this is an area that is firmly within my 2014 “quantified self” project. I’ve tracked my weight sporadically over the last ten years but decided that I must be more disciplined following the move over here, so that I would have early warning if things were heading in the wrong direction.

I’ve also been tracking my net calories, not religiously on a daily basis, but enough that I have an idea of what the broad balance is looking like. More about that in a future post.

And the results are in. In the spirit of transparency I share with you the graph showing the movement in my weight over the first year (I’m not quite transparent enough to include the numbers from the scale but you can see the general way things have gone).

The best news is that, despite a number of fluctuations, I have avoided the “Abu Dhabi Stone”, indeed my weight is a few pounds lower today than 12 months ago, although I do still fall firmly into the overweight category (if not obese I hear some of you whisper). I should probably admit that in August 2013, not shown on the graph, we were on our three week holiday in Florida, when I suspect that my weight increased, so a 14 month graph may not be quite as pleasing as the 12 month version, but the fact remains I have not got heavier.
A few more detailed observations on the peaks and troughs:

I’ve been back in the UAE for three weeks now and am managing a (very) gradual decline. I’m hoping that by going “public” with my journey I will shame myself into being even more disciplined about achieving a sustainable reduction, and getting to a point where Archie and Flossie don’t worry about me getting stuck in pipes at Yas Waterworld. Despite this the situation could have been much worse, and I’m certainly pleased I haven’t (yet) fallen victim to the Abu Dhabi stone. 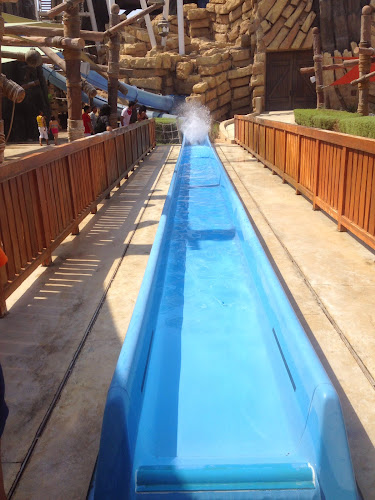 Dad, have you got stuck?

The UAE Government is increasingly concerned about the weight problems in the country. Like governments around the world they are trying various initiatives to address the issue, including inspections of school meal provision, and the “Your Child in Gold” initiative that started during Ramadan and ends next week. The initiative is that families will be rewarded with two grams in gold for every kilo of weight lost by any of their registered children under the age of 13. There was a month long registration period so I’m trying hard not to be cynical and imagine parents stuffing their kids full of food in the run up to the first “weigh in”.
So there we go. Let me know what you think. Are you an expat? If so, have you fallen prey to the “expat stone”? If not, what do you do to avoid it and still enjoy the expat lifestyle? All comments welcomed as always.