There is a definite “mall culture” here in the UAE. The main reason for this is that at the height of the summer it is too hot to be outside so many people gravitate to the malls for somewhere cool to walk, shop, eat and generally enjoy themselves.

Some of the largest malls in the world can be found here. One of the biggest is the Dubai Mall, which is not far off twice the size of the Trafford Centre in Manchester, and receives more than twice the number of visitors.

But that’s not enough for Dubai. Late last year plans were announced for a new mall in the Al Sufouh district of the city. The ambitiously named, “Mall of the World” is due to open in stages over the coming years. It is expected to have a total project area of 48m sq feet (possibly increasing to 80m sq feet), compared to Dubai Mall which is 12m sq ft. Thankfully it’s not going to be all stores. It will include a theme park (the largest indoor theme park in the world), 100 hotels (Yes, one hundred, you heard correctly. 25 of them within the mall itself, and another 75 around it, all connected by air conditioned walkways) and other tourist facilities. Annual visitor numbers are estimated at 180m, and there will be 50,000 parking spaces. I cannot wait to be stuck in that traffic jam!

Abu Dhabi isn’t without its mega malls either. Last December Yas Mall opened. It is a little bigger that the Trafford Centre and in my expert opinion a much more pleasant shopping experience. There are a number of other new malls on the horizon as well.

“Hold on”, I hear you say, “so when did you become a shopping expert?”. Well, it may surprise you to know that since moving to the UAE I have become something of a shopping addict. Strange, but true.

It is a complete turnaround. When we lived in the UK I would visit a shopping mall once a year, in the days before Christmas, to do my last minute shopping. Jo will tell you that I was the worst person in the world to go shopping with, so bad that when I needed a new suit for work, she would go shopping without me, and I would still be a pain when I had to try on whatever she came home with.

So why has everything changed now we are living in the UAE? Jo would no doubt tell you that I am still a reluctant shopper (in fact she probably wouldn’t put it quite so politely) but the statistics clearly prove otherwise.

In 2014 I visited shopping malls on 70 occasions, and get this, sometimes I went to more than one mall in a single day. Reluctant shopper? Humbug.

So who is right? Jo, who says I am still an awful shopping companion, or the hard facts, which suggest I am an avid shopper? A closer look at the data is called for (yippee, I’ve managed to manipulate the post round to numbers again!).

A breakdown of the days when I visited malls shows that 28 were at weekends but 42 were during the week.

But does that prove anything? Maybe I spend my weekday evenings shopping, or when I’m meant to be at work I’m feeding my shopping addiction. Sadly it’s nothing quite so exciting. A breakdown of the malls I visited on weekdays reveals a straightforward explanation. 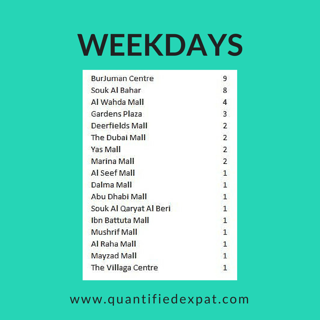 The BurJuman Centre, which is in Dubai, is a lovely shopping mall but it would be wrong of me to suggest that I drive to Dubai regularly just to shop there. In actual fact one of my largest clients is based at the BurJuman Business Tower, at one end of the mall. When I go for meetings I usually end up having coffee in the Starbucks in the mall before or after the meeting. In fact in all the times I have been there I think I have only been in three shops in the mall.

Souk Al Bahr, also in Dubai, is a small mall in the shadow of the Burj Khalifa (actually most places in Dubai are in the shadow of the Burj Khalifa, so that isn’t very helpful). In fact it hardly qualifies as a mall as it is mainly small shops and eating places. As an aside, it is a lovely place to wander round if you are “doing” the Burj and the Dubai fountains. The kids particularly like watching the men making sand pictures in bottles for eager tourists to buy. Anyway, I digress, my visits here are almost all for coffee at Starbucks on my way through the Souk from the office to a client I had nearby. So those visits don’t count either.

Are you noticing a theme here? Yes, most of my visits to malls during the week are to feed my caffeine addiction before or after meetings. Oh well, but that still leaves 28 visits to malls at the weekend, which is a 2800% increase I think, so my point is still proven.

An analysis of the malls I have visited at weekends starts to undermine me further. 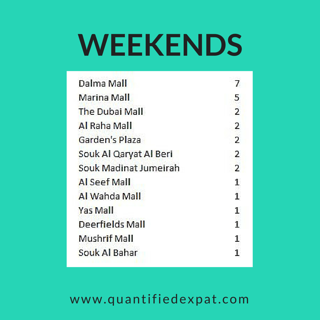 Looking at the list, I need to discount the visits to Dubai Mall (2), as these were simply to access the entrance to the Burj Khalifa when we had visitors. Similarly I need to remove the visit to the Souk Al Bahar, as this was just to access a restaurant from which to watch the Dubai Fountain. Gardens Plaza (2) is out as this is a small shopping nearby where I get my hair cut, and Al Raha Mall (2) was actually trips to the cinema. I also need to exclude visits to Deerfields, Marina Mall and Al Seef, because those were all on the same day in November when we were trailing round trying to find a pop up tent in the Carrefour sale.

But that still leaves a combined 11 visits to Dalma and Marina malls. That’s not too shabby. Although actually, Adventure HQ (kids play place) and Burger Fuel (yum) are at Dalma Mall, and those hardly count as shopping. And at least two visits to Marina Mall were to eat prior to events at the Emirates Palace Hotel, and involved no shopping.

So I think that leaves me with less than five visits that can be properly categorized as for shopping. Still a 500% increase on my average in the UK but I suppose I have to admit that Jo is right, I am still a horrendous shopper. Drat, another one for the list of resolutions for 2015.

Thank you for reading, I’m off shopping now. Not.

Source of data (for fellow nerds): I use the “Swarm” app (previously “Foursquare”) on my phone to “check in” at each place I visit. I have linked my Swarm account to a website called “Zenobase”, which automatically downloads my check ins and allows me to quickly analyse them in a variety of different ways. I’m confident that the data is pretty accurate, I have got into the habit of checking in when I arrive somewhere and probably remember to do so 95 times out of 100.